we had a very recurring topic: ‘Measuring Public Space: The Star Model’, and one of the main questions covered during the lecture, was:

Urbanists have long held the view that the physical and social dynamics of public space play a central role in the formation of publics and public culture. A city’s streets, parks, squares, and other shared spaces have been seen as symbols of collective well-being and possibility, expressions of achievement and aspiration by urban leaders and visionaries, sites of public encounter and formation of civic culture, and significant spaces of political deliberation and agonistic struggle. While urban commentators and practitioners have varied in their views on the precise detail of collective achievement across time and space, they have generally not questioned the assumption that a strong relationship exists between urban public space, civic culture, and political formation, as the quote that opens this paper clearly shows. [2]

Can we create “very good places” or is it only an illusion?

• Privatization and commodification of space
• The end of public culture-fragmentation
• The Golden Era and the “narrative of loss”
• Placelessness and the standardization of place, globalization, loss of authencity.

A LOSS OF PUBLICNESS OF NEW PUBLIC SPACES:

• ‘Commodification’ of space
• Gated communities and CCTV
• Exclusion and (though?) the ‘cappuccino’ society
• Rights infringement and political activism
• ‘Fantasy parks’ and Disneyfication of space
• Fragility of public space and terrorism.

Don Mitchell (1995):
‘Have we created a society that expects and desires only private interactions, private communications and private politics, that reserves public spaces solely for commodified recreation and spectacle?’

THE PRAGMATISTS (THE OPTIMISTS):

Here are the SIX QUALITIES OF SUCCESSFUL SPACES:

“However, I need to emphasize from the outset that what we know about the public realm is greatly overshadowed by what we do not know.”

Two traditions – stemming from different ways of appreciating the products of the design process:

I) As aesthetic objects or ‘displays’ – for ‘looking at’

II) As environments – for ‘living in’ or ‘using’

…argued that the city could never be a work of art because art involved ‘selection from life’, while city was ‘…LIFE AS IT’S MOST VITAL, COMPLEX AND INTENSE’.

(‘The Death and Life of Great American Cities, The failure of Town Planning’. Jane Jacobs)

‘To generate exuberant diversity in a city’s streets and districts,

(As the activities grow around the space, it becomes more lively)

‘It’s difficult to design a space that will not attract people. What is remarkable is how often this has been accomplished.’

Public space is simultaneously a product of (a) society – a dynamic reality:

A) on a long term scale

B) on a short time scale – the land development process – different actors with their own aims and activities.

Publicness has a dual nature: it can be a cultural reality and also a historical reality at the same time.

THE DUAL NATURE OF PUBLIC SPACE 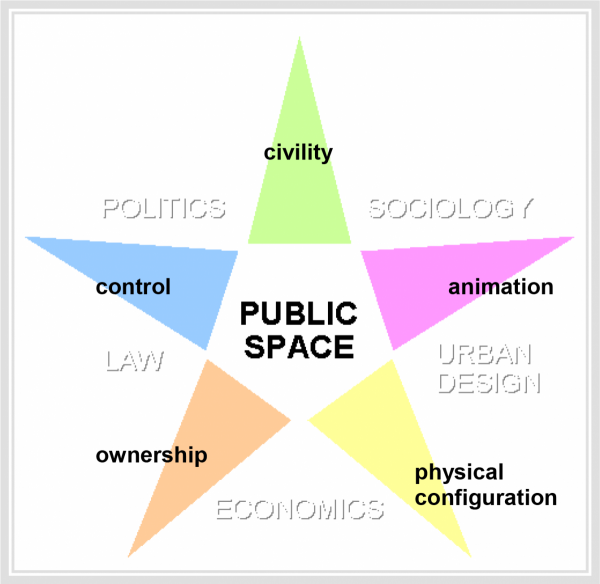 The theoretical Star Model of Publicness