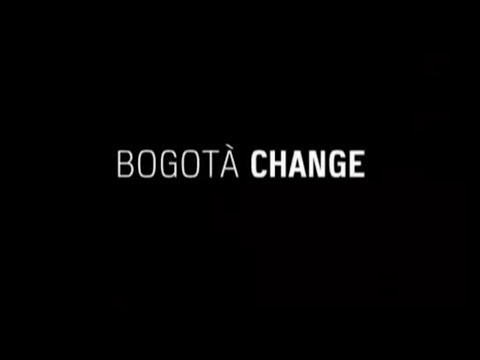 I want to share with all of you the link to a documentary about Bogotá city, in Colombia, called: “BOGOTA CHANGE” by the Danish film director Andreas Mol Dalsgaard, where he shows some big changes this Latin American city went through in order to show its citizens how to build the Bogotá they all wanted, which made it a great example of humane urban renewal.

It’s really amazing to be able to see, in less than an hour, the great changes that took a city a decade to achieve. Anyone would say that it is a long time, however, it was the necessary time to prepare people little by little for something better. The unorthodox measures and techniques that Antanas Mockus used during his first position as mayor of Bogotá (1995-1998) were the ones that prepared the ground for the change that Bogotá needed. As Mockus arrives at City Hall independently (without the help of any political party), he was able to delegate the important positions of his administration to academics, demonstrating to the people that he was not there to do favours, never mind politicians. The high standard that this character has on morality, will be the engine that will guide him in each decision making.

All the measures that he applied in this city, many unpopular ones, taught the Colombians how to use and take care of their city. He demonstrated the city that what it needed was a stable citizen culture, that strengthened the bond between the citizen and the State, and that, in addition, articulated the motivations, emotions and aspirations of the citizens, achieving respect and appreciation of the norms and increasing the sense of belonging and identity towards the city. Thus, a system of behaviours, habits, attitudes, values ​​and basic norms were established that were socially shared and accepted, because they were built from coexistence, solidarity and respect for each other, as well as from the sustainable enjoyment of collective goods.

Enrique Peñalosa, the successor of Mockus, was the other person who helped revitalize Bogotá. Under the slogan “The Bogota that we all want”, implemented, among other things, the construction of a bike path system by the main roads of the city, the remodelling of platforms, the construction of parks under the concept of respect and expansion of space public, and the massive transport system TransMilenio, whose model has been followed by different cities around the world. He changed the misconception that young people had of heroes, those who have expensive clothes, jewellery and extravagant cars, which are drug dealers, and taught them that true heroes are those who go to the library, ride bicycles, play sports, inculcating, in this way, the values ​​that would turn their city into a better one, tomorrow.

Mockus taught people to become citizens, Peñalosa built them a democratic city. Undoubtedly, the idea that a successful democracy depends on its citizen culture and the forms of citizen participation that it develops is increasingly valid. This documentary confirms that political will is an important piece in the urban development process of a city. However, we see once again that in order to reach the desired city, the conjunction of the different sectors of the city is needed, where the political will and citizen participation are only the first steps of the ladder towards a feasible city.

Hope you enjoy it, and be able to see the urban renewal theme from a different perspective!