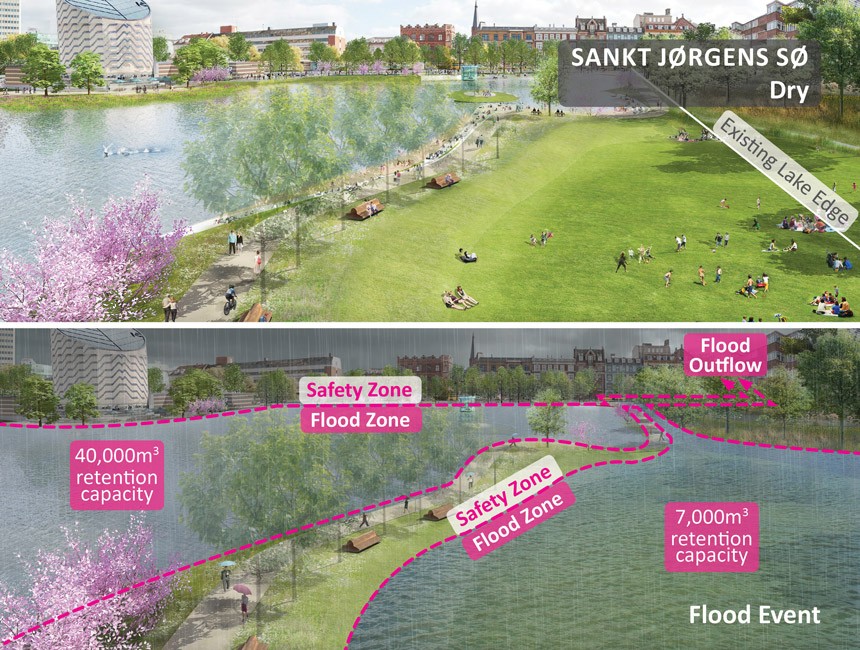 Landscape urbanism represents a post-modern rejection of the perceived failings of New Urbanism whereby design responds to the natural landscape rather than architecture. By looking back to the principles that used to guide the layout of cities (notably Geddes Valley Section [fig 1]), this form of urbanism proposes a return to similar ideas of design which centre around landscape and its features as resources which must be worked with rather than against.

James Corners piece Terra Fluxus (2006) refers to this concept in opposition of the idea of form being definite (terra firma) and rather a flow of shifting processes (2006: 30). He attributes the prolificity of terra firma to the “hyper-professionalized classification” of architects, planners and landscape architects, suggesting that this separation leads to landscape being marginalised and employed solely for its aesthetic function. In many cases this has led to cities being “grossly negligent with regard to nature” (Corner, 2006: 27), which considering the rapid urbanisation seen across the globe could lead to devastating consequences in the event of natural disaster.

In recent years the issue of climate change has become a topic increasingly less easy to avoid, globally flood risks are rising.  This is seen clearly in the UK where in the winter of 2015 over £1.6billion of damages was caused by the second wettest winter on record, flooding over 17,000 homes and causing power outages for 60,000. (National Risk Register, 2017: 17). The government’s response has been heavy investment in predominantly hard measures of flood defences, such as flood walls and flood resilient design, with £2.5 billion pledged to protect “more than 300,000 homes” (2017: 17).

This approach falls into the concept of terra firma, attempting to control the natural environment to maintain the established built form. However, there are those who suggest that this approach can in fact lead to worse flood consequences, scientists working on the Mississippi River suggest that recent flooding is “a man-made phenomenon” (Bolstad, 2017) as levees and flood walls allow for flood plains to be developed on, leading to floods further downstream, or in other cases breach of the defences. But in the absence of these techniques, what is the landscape urbanists response to the issues of increased flooding?

In his seminal work Design with Nature (1969), Ian McHarg looks to the Dutch approach, who have through years at the mercy of the sea learnt that “it cannot be stopped but merely directed or tampered, and so they have always selected flexible construction” (McHarg, 1969: 7). In the absence of the reinforced concrete used in other countries flood defences, dikes are constructed of sand and clay. What is more telling however, is the way that a large amount of the seafront land mass is left undeveloped, with dunes deemed unsuitable for any building, or even passage, to avoid increased erosion. The flexibility of defence, leaving of land to nature and respect for the strength of the ocean are intrinsically linked with the concepts of landscape urbanism.

While these ideas of allowing the sea and rivers to run their course and build accordingly provide the safest way to mitigate flood risk, the majority of the world has not followed these principles. Are entire cities to be relocated to avoid the risk of flood? Clearly this cannot be the answer. Not only considering the huge costs, but where would these people relocate in areas where overcrowding is already an issue?

By looking at two examples of projects heavily influenced by landscape urbanism we can see how approaches can alleviate flood risk while maintaining city density. The first case study comes from Nijmegen in the Netherlands, where climate change has caused doubt over the ability of the dikes alone. H+N+S Landscape Architects proposed a scheme in 2016, Room for the River, whereby large channels have been carved through existing land to allow the rivers to safely process higher water levels. This not only alleviates flood risk, but for the majority of the year (when not flooded) creates a ‘river park’ which provides space for recreation. This approach is fairly destructive as a large land mass was sunken to allow the river to flow, however this space was not built on previously anyway.

The second case study allows us to see how built up areas can still design for flooding. After floods in 2011, Ramboll Studio Dreiseitl created a Strategic Flood Masterplan, which proposed the creation of a Blue-Green city. This involves a dual function approach where water is kept out of sewers through surface solutions, such as roads and green spaces which are designed to transport water to the rivers by in essence intentionally flooding designated areas of it. This technique allows for the city to function as usual, even in the chance of flood.

The Landscape Urbanists view of the city as something to be shaped by its natural environment is ever more important with the impacts of climate change, however finding ways to do so within the established urban form as seen in these examples is the key to this approach.