Thank you very much for Xinmin’s article. In fact, the New York High Line is a very good urban renewal plan. It was originally a very important railway transportation line in the industrial age of the United States. After experiencing a series of historical factors, it became a world-famous landscape design.

It is a city regeneration design, but also a traditional and modern integration of design. Specific design plans did not cater to the pursuit of “large-scale” and “eye-catching” trend at that time (David, 2002), but based on the accurate measurement of high-line area and scale, using fewer roads and more original surface, plus a variety of plants, to create a “slow-paced” space. 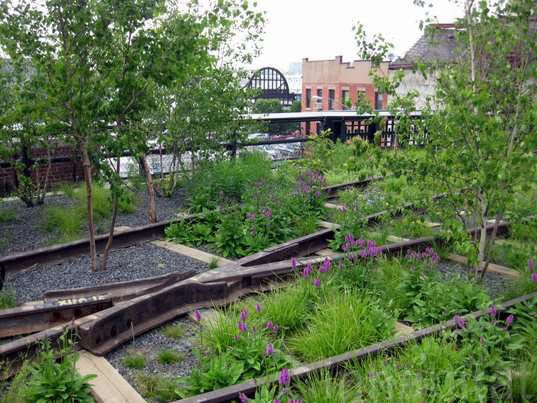 The green space in the park not only reduces the heat island effect, but also provides living space for wildlife, insects and birds. The main plants in the garden are native species, and perennial plants, grasses, shrubs and trees are selected according to cold tolerance, sustainability, shape and color (David, 2011). Many of the wild flowers and plants that originally grew naturally on the rails have also been preserved as part of the park landscape, in order to reproduce the historical sense formed by the long-term abandonment of the railways.