Cheers Zijian for a good read. As you highlighted Paris is a good precedent for its use of public space within the city and how many spaces have been adapted from quite early on to cater for various uses instead of just the one. I liked how you referenced the past for how Paris supported the need for public spaces and in particular interlinked ones to boost the pedestrian circulation. I would like to  share with you a great example of what you have wrote about, as a further study into this field. Where the City of Paris has reclaimed road space, creating a shared public space. This is the project of The Léon Cladel gliding area. The project aim was to reduce motorised vehicle usage and in turn boost the means of active modes of transport. The street was converted to a shared area which encompasses a ribbon of track for skateboarding or biking. The project was the first of its kind in Europe “of reclaiming a historic centre street for a shared public space”(Plug Good Practice, 2013). The project was developed after the asks of the young people in the area, who had developed a DIY skate park with moveable ramps, and instead of demolishing this or moving it, the local council saw this as an opportunity. The outcome after working with an architect is an accomplished street structure that is very artistic and purposeful, a perfect blend of the two to create a very successful public space and this should act as a precedent for others worldwide. 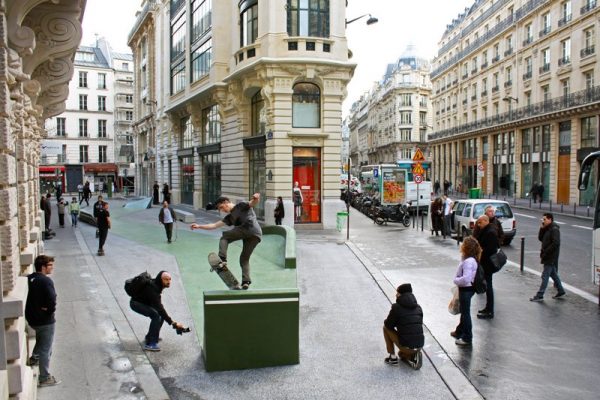