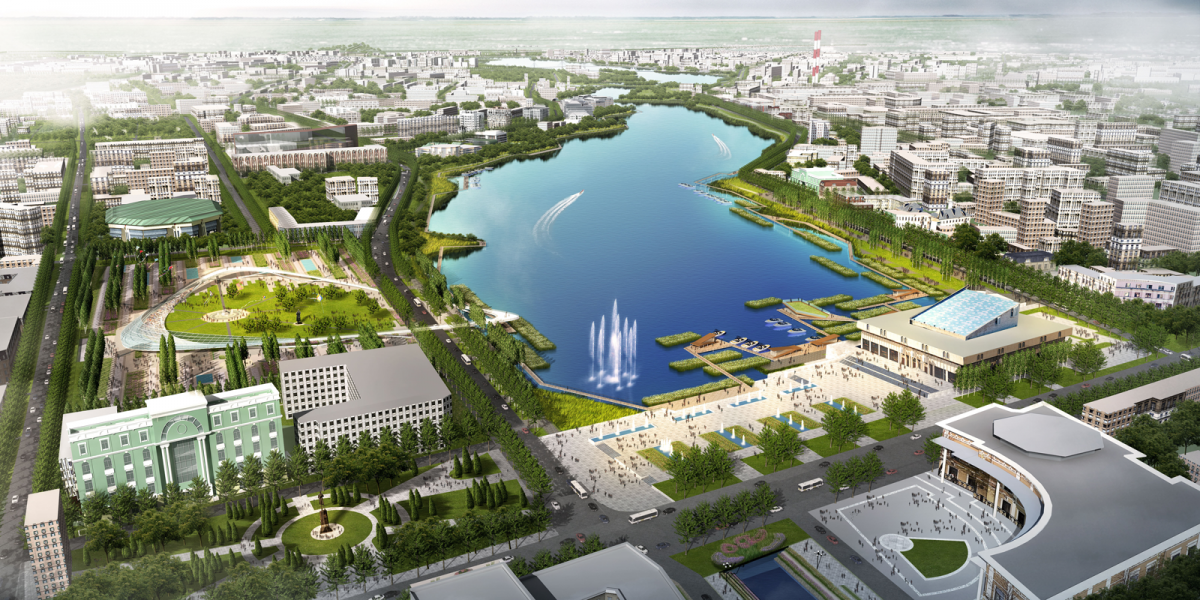 Thank you, Mudit, for your interesting article about the waterfront regeneration! It is a breathtaking topic and I would like to dedicate my post to the redevelopment of the Kaban lake system embankments in my homecity, Kazan.

History of the Kaban lake

Kaban is the largest lake system in the Republic of Tatarstan with total area of 186 hectares. It includes 3 lakes: Lower Kaban, Middle Kaban and Upper Kaban extending from north to south and connected via channels [1]. In the XVI century, built urban fabric began to approach the Lower (Middle) Kaban. In the middle of the XVIII century its shores were completely built up with residential quarters. From the second half of the XIX century intensive industrial construction began on the shores of the lake. All drains have been falling into the Lower (Middle) Kaban, and the water have become unfit for drinking. Therefore in the second half of the 1970s, fish has disappeared in the Lower (Middle) Kaban and almost all the near-bottom invertebrates died [3].

For today, in the Republic of Tatarstan the approach to working with public spaces has totally changed. 2015 was the Year of Parks and Squares of Tatarstan and 2016 was the Year of the Water Conservation Areas. An open international competition for the development of the Kaban lake system embankments opened on June 18 2015 [1]. The competition aimed to reveal the best project that would take the existing urban surroundings into account and create a schematic design of one of the embankment sections of the first construction phase. 164 teams applied for participation, and only 10 of them ended up in the final.

On the 1st of October 2015 the winner of the competition was identified. It was the concept “Elastic tape: Immortal treasure of Kazan” by Russian-Chinese consortium Turenscape + MAP architects. Official information about the project could be easily found on the Internet sources. Therefore, I’d like to share my personal opinion about this project not only from a professional point of view, but also from the point of view of a Kazan resident.

The winning project is a classic of landscape architecture and urban design. It takes into account the best world traditions. The project focuses on bringing new life into the lake system and revitalising it in terms of preserving green shores and landscapes and cleaning it, using biological and hydraulic methods.

It is a large-scale and a long-term project. This project combines social and cultural life and the natural environment together. It takes into account the transport infrastructure of the city, too. This project is an excellent example of creating a modern multifunctional space, using the latest technologies, in order to achieve the most careful and respectful attitude to nature and to the ecosystem. This project also pays great attention to preserving and emphasizing the architectural and historical identity of the place. Great emphasis is placed on the “sense of place.”

Kaban Lake has become one of the main points of attraction for people in our city. It brings people together and creates a happy environment. There are open-air cinema, yoga classes, educational programs for children and many other activities being held which are interesting both for children and adults. The needs and desires of various social and age groups are taken into account. I would like to know, so as many other people, about Kaban Lake in the world and many tourists to visit this memorable place.