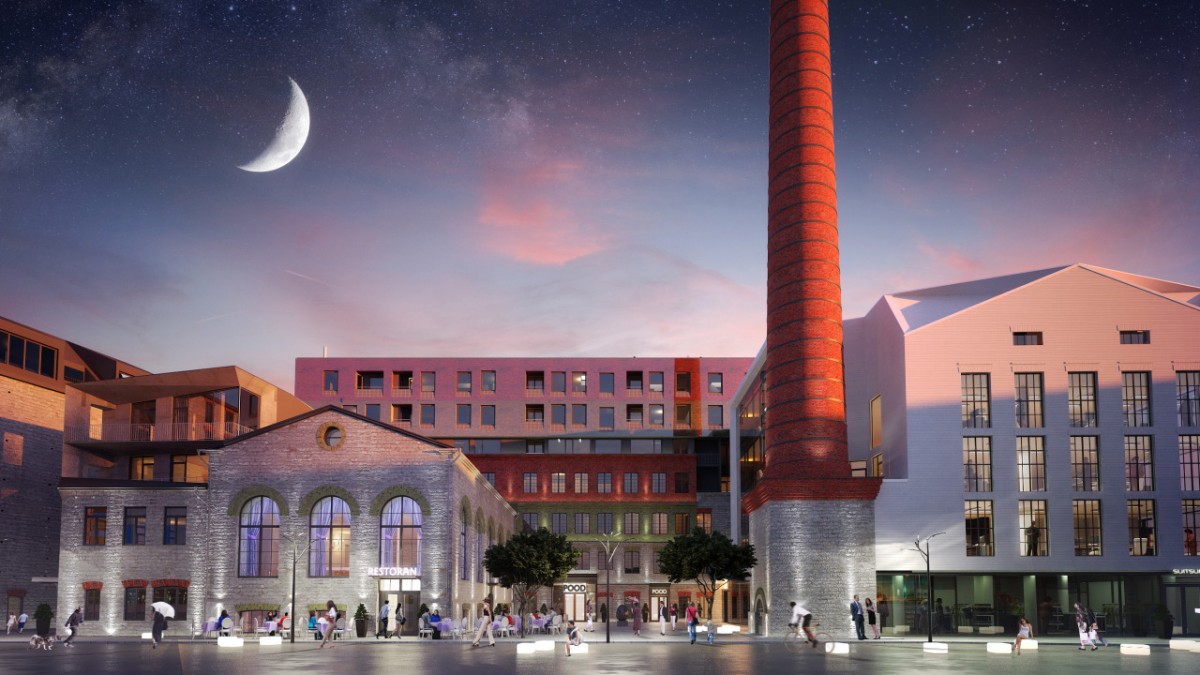 Restructuring of the world economy and the process of global industrial production centers shifting in 1970s – 1980s have become a reason to search for new ways of use the large-scale engineering structures, both in cities and beyond. There is an understanding of industrial sites as historical and cultural heritage.

This historic quarter is located between the Old Town, the seaport and Viru Square. The area got its name in the honor of the Rotermann German industrial dynasty, since in the late 1820s there were manufactures, founded by them. The historical core of the quarter was formed in the first decade of the 20th century. In the Soviet period, the buildings fell into disrepair [1]. The ruins reigned here till the beginning of the 2000s, when the city authorities decided to turn the depressed area into one of the main attractions of Tallinn, Estonia and the Baltic states. Nowadays this is a business, shopping, leisure, entertainment and also residential quarter in the central part of the Estonian capital.

This project was initiated by the Norwegian public organization SiO. It specializes in creating housing for students. The grain elevator, which operated from the 1950s to the 1990s, is renovated and adapted to accommodate 226 apartments. All of the apartments have round shaped floorplans. That provides a good illumination and beautiful views on the Akerselva river. But that also causes difficulties with furnishing. That’s why these apartments are built for rent already with furniture installed and designed especially for that project. [1]

“KAAPELITEHDAS” means “Cable Factory” in translation from Finnish. This factory was built in 1939 by the project of the architect V. G. Palmquist. It operated from 1943 – 1987 [5]. This huge building (56 thousand sq.m.) with its surrounding area had been turned into a cultural center. Nowadays it’s the largest and the most diverse from a functional point of view cutural centre in Finland. There are 3 museums, 12 galleries, 6 sites for public events, dance theatres, ateliers, art schools, rehearsing studios, radio stations, a popular cafeteria and morerehearsal halls, radio stations, cafes etc. [5]

Interest in the revitalisation of industrial areas in Russia appeared in the mid-2000s and had been intensifying due to the financial crisis that occurred in 2008. After 10–15 years a number of successful examples appeared in the capital of the country as well as in the regions.

The Street Art Museum is unique as it has no analogues in Russia so as in the rest of the world, since it is located in still functioning plant of laminated plastics (Fig. 5). The idea of ​​the museum was born in Summer’2011 after a graffiti party held in one of the abandoned workshops. It was realized in 2014. The territory of the museum includes two zones. One of them is a zone of public events where performances and festivals take place. The another one is a permanent exhibition, a collection of monumental wall paintings (Fig. 5, Fig. 6). [1]